In Val Torrone, there is a little-known peak called Punta Ferrario. 3258 meters high, this granite pyramid towers just next to Pizzo del Torrone and is crossed by different routes. 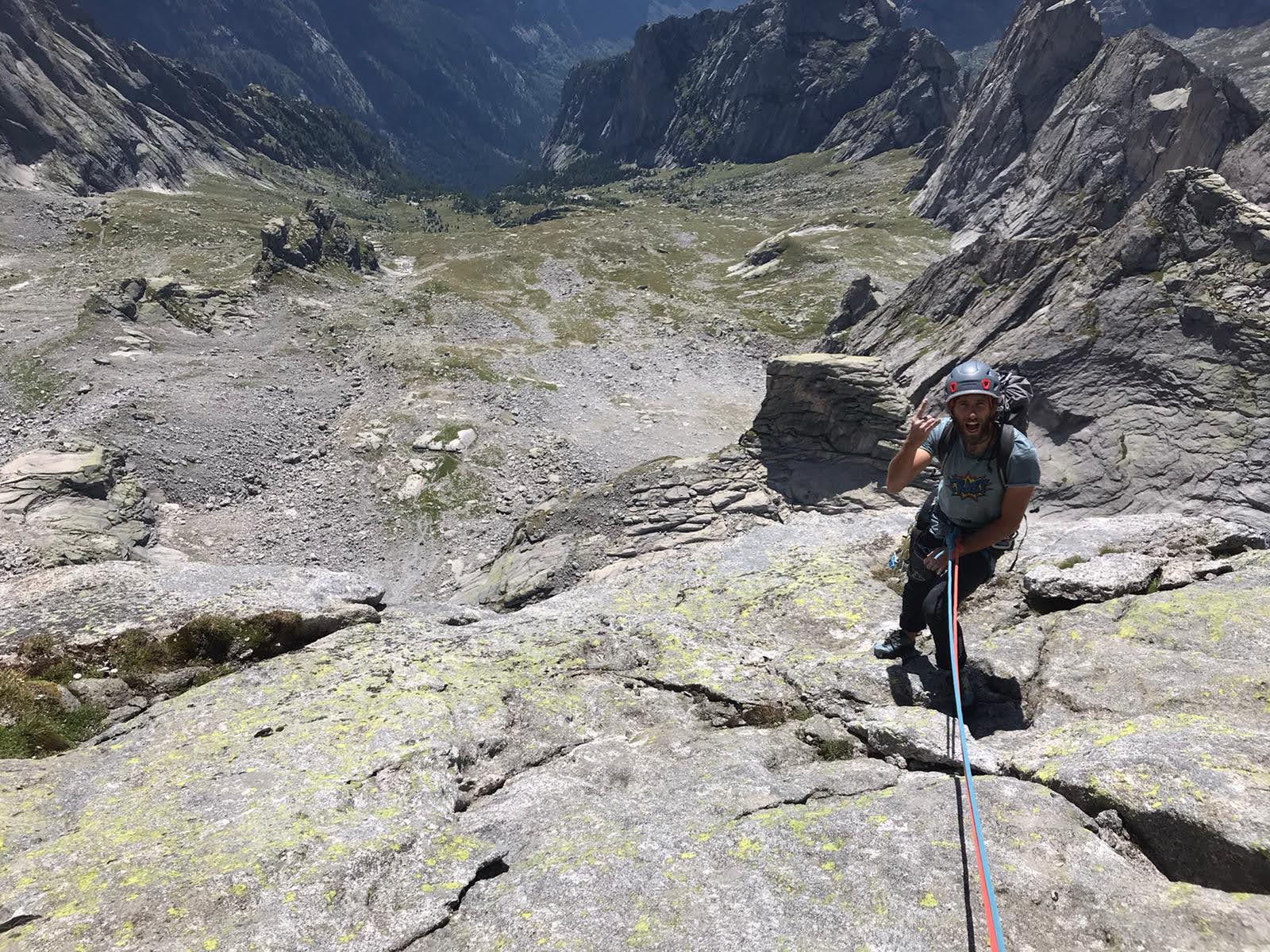 Giacomo Regallo and Paolo Marazzi decided to climb Punta Ferraio following the Czech Direct, a route opened in the summer of 1980 that was never completely freed. This challenging route, named after  Ciernik, Hyuny, Marek and Piacek, is characterized by severe grades (VI A2), yet Giacomo and Paolo decided to attempt the climb anyway, encouraged by drier rock conditions.

How did you decide what peak to climb? What were your plans?

As is often the case, our original plans were actually quite different. We had planned to climb a ridge that had likely never been climbed before. However, the evening before the climb, we were talking to some friends, as well as to some locals who know the valley well and we changed our minds. We had been playing with the idea of going and freeing this route for quite some time. So the prospect of the big central dihedral actually being dry made us change our plans.

How did you approach the climb?

As far as the choice of equipment, we decided right from the start to keep it as light as possible. Both “hardware" and food were reduced to a minimum. We then opted for a recovery sling so that we could take the bag on the hardest pitches, leaving the second one on the rope free to climb without any weight on his shoulders.

After spending the night at the Manzi bivouac, we woke up early the next morning. The weather was good so we started walking and reached the start of the Direct within 40 minutes. I set off first and then we switched, reaching the base of the dihedral rather quickly. From here, I lead the first pitch, the grade was quite challenging but we didn’t have any problems. Paolino followed on the next pitch, which we both freed.  Past the dihedral, the second half of the ascent was waiting for us. Things went smoothly even though the pitches were far from easy.

How long did the ascent take?  And the descent?

The climb went quite smoothly and after about 6 hours, around 2 p.m., we made it to the top. The descent was a whole different thing though. We were planning on following the piton belays along the ascent route of the nearby via Taldo.

We were expecting to have to change some slings, but we hadn’t planned on having to replace some belays all of the sudden because they were definitely too old or dangerous. After countless rappels, belays and even having to climb back up to free some jammed ropes, we made it down and headed for a well-deserved dinner at home.

What was the most challenging part?

The central part of the route, the overhanging dihedral, was certainly the hardest section. I have to say though that even the pitches that seemed easier on paper weren’t exactly a walk in the park.

Actually, none of the routes opened by the Czechoslovakians in Val Masino are easy!

Did you ever think of quitting?

No, not even once. Everything went without a hitch right from the first pitches. The biggest question was if the dihedral would be dry enough to free-climb, but we did it.

How does it feel to complete a route that was last completed more than 40 years ago?

As far as we know, the last time anyone climbed the route again was in 2004, that was the first solo and winter ascent by Simo (Simone Pedeferri).

I don’t believe any other person has climbed that route since that day in March.

Climbing any of the Czech routes is always a bit of a gamble because the actual routes are often more difficult than the reported grades would let you believe. In fact, at the time the Czech climbers opened those routes, the highest grade in the Eastern European grading system was in fact VI, so that ended up being the grade. It’s also worth mentioning that they were highly motivated to complete the climb and were willing to take risks not everyone would be willing to take!

What is your next challenge?

I have a notebook full of all the dreams and projects I would like to still make reality. Our main goal is the integral ascent of the Cameraccio crest, completed for the first time in 2005 by the Ragni (Simone Pedeferri, Alberto Marazzi and Matteo Bernasconi) and never attempted again since. As soon as conditions and weather will allow, we will try to climb it. Weather permitting, we would also like to get our hands on one of the most remote walls of the nearby Val di Zocca which, to date, is still free of routes.